The History of Bean’s Greenwood Marina 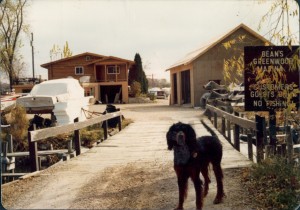 Owners Jim Bean and Linda Britzius (maiden name) both grew up around the Lake Minnetonka area, and their family ties to the area date back to the 1880’s. Owner and Manager, Aaron Bean, grew up on the premises, and has always had a close connection to the business. Aaron married Angie Pehle in 2011, and they both currently run the marina. Their daughter, Lillian Bean, was born in 2012, and is under the impression she is in charge of the Marina. Justin Ryan, the manager, has been working with Greenwood Marina since 2004. Jim Bean and Linda Bean left behind a passion for the lake and surrounding area.

Jim and Linda Bean purchased the marina property from Bud Jensen in 1974, which was a parcel from the much larger land of Solberg’s point. Bud had purchased the property from Don Newcomb, who owned the property from 1944 to 1965. Mr. Neucomb built the foundation for what would become Bean’s Greenwood Marina, with a small number of slips for rent, a bait shop, sandwich shop and a modest house where he resided. The property had been used for farmland up until the 1920’s, and was owned by the Goodman’s.

St. Alban’s Bay was named by Enos Day, in the 1880’s, after his hometown in Vermont. In 1856 a small hotel, Episcopal church, and a mill was developed by Charles Morris, and the premises was dubbed his Garden of Eden. Grasshoppers brought the mill to it’s demise, and it burned down in 1859, leaving the bay less populated. Ginseng roots were being harvested at the time, and being sent to Wayzata for drying, before being purchased by China for 9 cents a pound. In 1912, the St. Alban’s Hotel and Health Resort was erected on a 14 acre parcel that offered 2,000 feet of shoreline.

Below you will find photos of present day Bean’s Greenwood Marina.